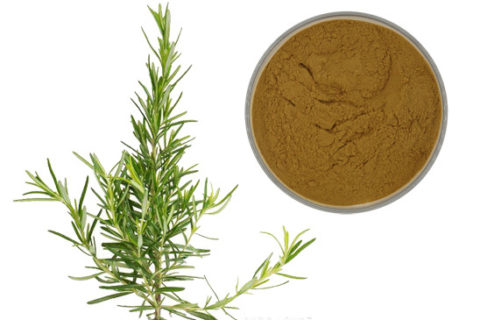 Rosemary is a perennial evergreen subshrub of the genus Rosmarinus in the family Labiatae. Also known as Tanacetum vulgare. It is native to the Mediterranean coast and is mainly grown in France, Spain, Italy, Morocco, Yugoslavia, and other countries. China successfully planted in 1981. Rosemary has been used in some European countries for more than 2,000 years to improve memory, treat speech disorders, regulate menstruation, produce hair, aid digestion and protect the liver.

Rosemary extracts are derived from the leaves of Rosmarinus officinalis L, using food grade acetone, ethanol, hexane, or a combination of hexane and ethanol (in a two-step process) as extraction solvents. It may also be extracted using supercritical carbon dioxide. Subsequent production steps may include filtration, purification, solvent evaporation, drying, and sieving.

Rosemary extract is composed primarily of phenolic acids, flavonoids, diterpenes, diterpenoids, and triterpenes, and is characterized by the content of carnosic acid and carnosol. Today, rosemary extracts are increasingly employed not only to provide flavor but also as natural alternatives to synthetic antioxidants for the stabilization of oxygen-sensitive foods. Rosemary extract has permission to be used as a preservative or antioxidant food additive in the EU, Japan, Singapore, and China. At the same time, rosemary has anti-inflammatory, antibacterial, anti-cancer, anti-tumor effects.

Carnosic acid and Carnosol:Insoluble in water; soluble in oil

Antioxidant
Diterpene phenols in rosemary are the main components of antioxidant activity, including rosmarinic acid, carnosic acid, rosemary dialdehyde, carnosol, rosemary diphenol,and so on. A large number of antioxidants impart a higher antioxidant activity to rosemary. At present, it is generally believed that the anti-oxidation function of rosemary is mainly due to its ability to quench singlet oxygen, scavenge free radicals, cut off the chain reaction of lipid automatic oxidation,synergistic effect of chelated metal ions and organic acids. The reductive components of rosmarinic acid, such as phenolic hydroxyl group, unsaturated double bond and acid, have antioxidant effect when they exist alone, and have a synergistic effect when they are combined together. Studies have found that the active component of rosemary as a free radical scavenging agent, mainly through the capture of peroxide free radicals to inhibit the progress of the peroxide chain reaction. Because the generated phenolic oxygen radicals are relatively stable, it reacts very slowly with lipid compounds.Therefore, the free radical chain transfer and growth are slowed down, and the progress of oxidation process is inhibited.

Anti-microbial
Sun Jiao etc. studied the antibacterial activity of rosmarinic acid against Escherichia coli and Staphylococcus aureus by plate growth inhibition method. The results showed that rosmarinic acid had antibacterial activity against both bacteria, and the antibacterial activity against Staphylococcus aureus was more prominent. The analysis of the experimental data showed that rosmarinic acid had significant bacteriostatic effect on the tested strains when the concentration was more than 0.5%. Rosmarinic acid has a broad spectrum bacteriostatic effect on common Gram-positive bacteria and Gram-negative bacteria, especially on Gram-positive bacteria. Xu Yan etc. used edible ethanol to extract antiseptic substances from rosemary and explored the inhibitory effect of rosemary alcohol extract on common contaminated bacteria in food. The results showed that rosemary alcohol extract had different inhibitory effects on Staphylococcus aureus, Escherichia coli, Bacillus subtilis and Hanson’s yeast in varying degrees, among which the inhibitory effect on Staphylococcus aureus and Bacillus subtilis was the most obvious. The minimum inhibitory concentration was 6.25g /L. A large number of reports have shown that most of the chemical preservatives are carcinogenic, malformed, prone to food poisoning and other problems.. As a natural preservative, rosmarinic acid can not only replace synthetic chemical preservatives which have a certain impact on human health, but also endow food with a unique flavor.

Liver protection
Rosemary protects the liver by limiting lipid peroxidation, thereby reducing cell membrane damage. Rosemary extract can effectively reduce the blood lipid level in mice, prevent and reduce the occurrence of arteriosclerosis, and improve the anti-oxidation level of serum and liver. Rosemary essential oil can reduce the serum levels of ATS and ALT, and can also change the activities of antioxidant enzymes, catalase, peroxidase, glutathione peroxidase and glutathione peroxide reductase in liver.

Antidepressant effect
Rosemary can exert its antidepressant function mainly by improving the neurobehavioral changes of the body. The antidepressant effect of rosemary is similar to that of fluoxetine, which can interact with serotonin, norepinephrine and dopamine system to change the function of central monoamine system. The active ingredients in rosemary containing luteolin, rosemary acid and carnosic acid can improve the choline function of PC12 cells, and can improve dopamine, serotonin and gamma-aminobutyric acid pathway by regulating pyruvate carboxylase and tyrosine hydroxylase, and even protect nerve cells from corticosterone toxicity, so as to regulate the nervous system and treat depression.

Pharmaceutical industry;
●Health care industry,like capsules,tablets;
● Food & Beverage industry.
Rosemary has antioxidant effect because of its heat-resistant and can withstand long-term high-temperature frying at 190 ℃. Rosemary antioxidants are the only ones that do not decompose when fried at 140 ℃, so they can be added to a variety of foods, such as meat products, ham products, sausage products, deeply processed cooked meat, seafood, animal and vegetable oils, potato products. fried food, baked goods, etc.
Cosmetic industry
Rosemary antioxidants have been paid more and more attention in the field of cosmetics because of their superior antioxidant properties, pure natural, non-toxic side effects. Rosemary antioxidant is an excellent additive in cosmetics, which can promote the blood circulation of skin, strengthen the contraction and expansion of blood vessels,clear free radicals and inhibit the degradation of human elastic protein, so as to maintain the elasticity and luster of skin.